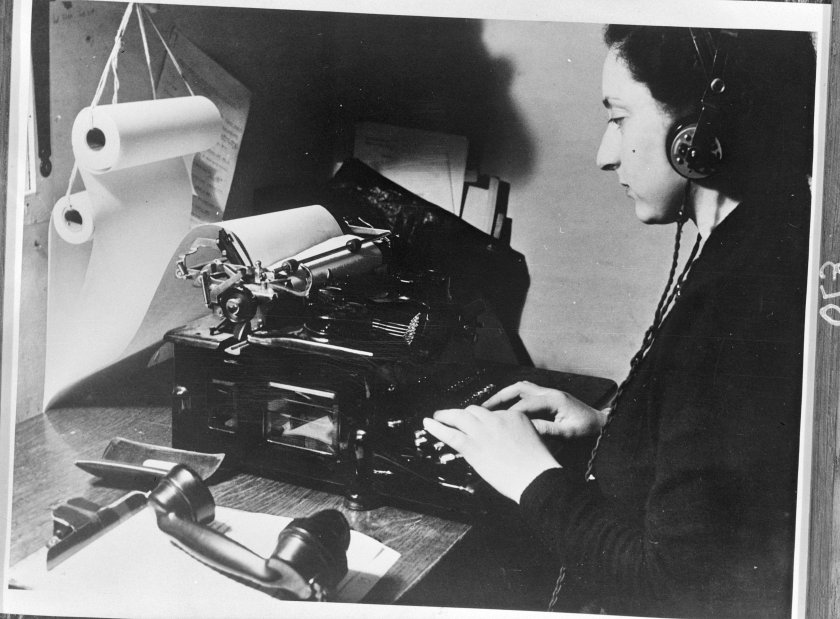 I was recently enthralled by the hashtag “Thanks for Typing”. In a nutshell #ThanksforTyping is a way for today’s intellectuals to share and shine a spotlight upon just how vital the (often unpaid) labour-both intellectual and emotional-of typists, proofreaders, research assistants and other (often unpaid) has been in the development of knowledge.

Within the field of modern British studies, uncovering “brain work’s hidden labourers” is an area of research that is gathering pace. Probably my favourite article last year was Carolyn Steedman’s “Threatening Letters: E. E. Dodd, E. P. Thompson, and the Making of ‘The Crime of Anonymity’” in History Workshop Journal, exploring the relationship between the author of the Making of the English Working Class and his longstanding research assistant.

But when it comes to my current project, exploring graduate study at the Centre for Contemporary Cultural Studies in the 1970s, I’d be the first to admit that it’s probably the spells I’ve spent as a clerical worker that lead me to be intrigued by the traces of typists and other fleeting interlocutors glimpsed in the archive.

Clerical work requires a lot of patience and a surprising degree of flexibility. Being the CCCS’ Secretary, a position held by a woman called Joan Good in the period that I study, probably required even more flexibility than most, not least because of the shear volume of work. As John Clarke, who was involved in the CCCS throughout much of the 1970s recalls: “We [the students] had to be involved in the management… They were running a research centre with 1.5 [academics] and a secretary”.

These attempts at “management” might not have always have been welcomed by a professional administrator, as Janet Batsleer recalls:

“…I think she was amazingly tolerant of the way folk occupied that space really, because it [the Centre’s Gestetner duplicator, located in Joan’s office] was used a lot to produce papers and she was there for sessions and so on, that is probably why she sticks in my mind so much.”

Clerical workers also intrude into the contemporary documents that are stored in the CCCS’ archive. Traces of their presence and exertion lingers in the physical effort in terms of paper filed and sifted, in the typed indentations on the page, in the occasional awkward line break and neat dab of correction fluid. The relationship between a “writer” and a typist is akin to that of a draftsman and a machinist, one sketches the blueprint, the other gives it embodied form. It is a very different relationship from that between writer and computer. Dorothy Hobson’s MA thesis (1978) notes that her initial typist “was carried off to have her baby”, if you go to the Library’s Research Reserve and call it up you can see the change in typists to the line. MacBooks don’t take maternity leave: the experience of relying on a machine and relying on a person is quantitatively different and cannot but affect the work you produce.

Other CCCS’ theses also thank typists. Paul Willis lists no fewer than seven women who helped produce his final PhD, noting that they saved him “in [his] hour of need… From [his] own indifferent typing”.

Interestingly John Clarke MA thesis, lodged a year or two after Paul Willis finished his PhD thanks “Paul Willis for his assistance… with the typing”. This initially led me to assume that Paul’s’ typing had become less “indifferent” and that he’d stepped in to lend his friend a hand. John Clarke’s oral history, however, shines a light upon what actually happened. He apparently “…inherited [a class] from Paul Willis at Birmingham Poly which was teaching private secretaries two components of an advanced diploma, one part of which was use of English in communications… the other part was key management concepts so that they would be able to appreciate the male supreme elements that they were working for.”

He clearly built up a rapport with the class because as he recollects:

…embarrassingly if you go to the university library and find my Master’s thesis you will find that it was typed on 10 different keyboards, because they said, “We’ll do it for you,” and so they took a chapter each, they were all entirely different.”

my interpretation of the part of the thesis dedication that thanks Paul Willis “for the typing” is that Clarke was actually thanking his friend for passing on the class to him. Who knows: maybe a previous cohort typed Paul Willis’ PhD up for him?

Interestingly Hazel Chowcat, who studied for a PhD at the Centre between 1977 and 1980 and who, having been a secretary herself, was interested to study the ideological patterns that structure clerical work, actually argued that making generous and emotionally involved gestures like offering to type up your tutor’s dissertation were key to the secretary’s job. Much as Paul Willis’ later project Learning to Labour shows that the key skills needed to navigate and cope with manual work are honed in patterns of “anti-school resistance” displayed by working class schoolboys, so Hazel Chowcat indicates that the key to understanding clerical work is that it is usually performed by women. For her, secretaries are oppressed and controlled twice, once as “workers” then as “women”, expected to perform caring duties in a discreet and compliant manner.

Given the current interest in studying the processes that produced the documents in our archives and the books that sit on all our bookcases pit-prop our disciplines, what can be gleaned from the CCCS’ practice as researchers and writers in the pre-digital age (and in Hazel Chowcat’s case, her research) is incredibly vital in pointing to ways in which we can question the conditions within which intellectual inquiry once functioned.

In true academic style, though, I’ll end this post on a plea or two. Firstly do go and scroll through #ThanksforTyping. Secondly if anybody, for a journal article, undergraduate, or MA, dissertation (PhD, postdoc..?) wants to go and research the questions relating to academic production and scholarly labour in the 20th Century the archive is amongst you, you walk within it and you walk past it every day.

I was at an event in a professional capacity the other week and an academic colleague asked me what I was researching for my degree. I began to explain, talked about the CCCS archive, talked about the long memos they used to send, the academic colleague recalled the long memos they used to receive… At this point another administrative colleague, who was working at the University long before I was born, chipped in “interesting to hear you talking about how academics used to send each other loads of long memos. I used to have to type them all and post them!”.

There are still quite a few university staff today who remember the world that the 1970s CCCS was working in. An administrator that joined the University straight from secretarial college at seventeen in 1978-the year that Policing the Crisis was published-would only be fifty six or fifty seven today, and very possibly still working here. They’d certainly have stories to tell: of what different professors were like to work for, of what it was like to have to “book time on the word processor”, of the days when unaccompanied secretaries were not allowed to enter Staff House and it was the greatest honour to be invited for a drink in what’s now the Bratby by “your professor”.

#ThanksforTyping appeared originally on the Blog of the Modern British Studies Centre at the University of Birmingham, published on 10/04/17