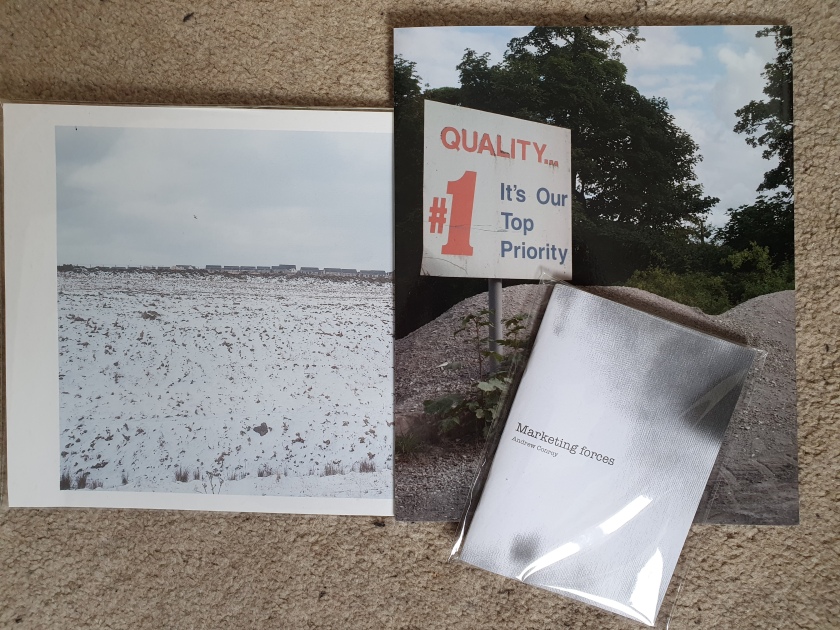 Kicking off an occasional series of Q&A type blog posts talking to interesting people doing exciting things around photography, history and visual culture, I was lucky to be able to catch-up with Andrew Conroy and talk about his practice.

I came across Andrew and his work on Twitter where his 1984 zine and his support for an inquiry into the Battle of Orgreave came up around the time of the 36th aniversary of violent clash in June 2020. In the current moment justice for the miners who were brutalised, injured and wrongly criminalised seems far off. However, in Andrew’s thoughtful and styalised work, which picks out the traces of South Yorkshire’s still recent mining past it is hard not to be moved and provoked to discuss and remember the violent suddenness with which coal mining as a major British industry came to an end.

How would you describe your journey into photography?
With reference to a map that I pieced together as I went along.

Is there anybody, or any tradition (whether photographic or not) that particularly inspires you?

I’m a fan of all kinds of things and always ready to be stopped in my tracks by new perspectives, voices and approaches, whatever form they take. As weird and worrying as the twenty-first century has become, it continues to create a virtually limitless supply of great stuff to gorge on.

How do you tend to get inspiration to undertake a particular project?

There are always things floating around that resonate in some way. Projects are just as likely to quietly creep up as suddenly emerge.

Much of your work like 1984 and Nine Former Collieries in South Yorkshire seems to explicitly draw upon something from the recent past [large scale coal mining] which is now gone. How as a photographer do you seek to overcome the challenge of depicting what is no longer there?

South Yorkshire’s association with coal mining looms so large that it’s hard to think about it in terms of absence. While most of the infrastructure has gone, coal retains a huge presence, one that goes far beyond the gloomy romance of any remaining ‘industrial ruins’ or the ‘official’ and highly sanitised narratives on display boards around the region’s former collieries. If there’s a clear material example, it’s the highly charged inscription on a National Union of Mineworkers plaque outside the former Hatfield Main: ‘Here stood the miners and families of Hatfield NUM in defence of their jobs, communities & against industrial genocide. Loyal, proud & true. Never forget- never forgive.’ Tuning into such strong residual feelings was always more of a consideration than the industry’s material and economic absence.

Orgreave has a presence all of its own, one that won’t be erased. The site’s history as a place of conflict and trauma was what got the ball rolling on 1984 as a piece of work, but it was more about exploring what Orgreave – which has actually been rebranded as ‘Waverley’ – has become. Aspirational homes, hi-tech engineering and a manufactured green space are at the centre of the Waverley brand, so the same environment has two contrasting and semantically very strong ideas running through it. But try as it might, Waverley can’t escape the fact that it will always be Orgreave.

Both your work looking at post-mining sites, spaces and communities, and your work exploring other topics captures a kind of emptiness. It seems (to me at least!) that the views and objects you depict are isolated and alienated. Is this your intention – and if so, would you draw any links between a series like Nine Former Collieries in South Yorkshire and one of your other ones like Single Digit Decline?

It all ultimately comes from the same place.

Have you shown your work to people from the communities which you photograph – if so, what has the response been like?

Not directly, no, but I often fall into conversations with people as I’m making work. I did a part planned, part spontaneous project last year that involved a sixty-mile loop of Barnsley. The spontaneous part included several detours that were consequences of chance meetings with local residents who came over to shoot the breeze and point out things of importance to them, which certainly opened up my sense of what I was looking at.

1984 was a bit different. It was made in a space that witnessed a key moment in Britain’s past, one that was bitter, violent, ugly and divisive. But it’s now a place where people wash cars, order takeaways, celebrate birthdays, walk dogs, chat over garden fences, worry about the health and wellbeing of their nearest and dearest and build meaningful links with one another and an environment that they’ve made a massive emotional and financial commitment to. As much as the bigger picture of this has been shaped by the same political and economic forces that led to the Battle of Orgreave, the immediacy of people getting on with the business of living their lives and making the space their own made it a more challenging project to produce and live with than Nine former collieries in South Yorkshire.

When people who are not from the communities which you photograph see your work, is there anything in particular that you hope they take away from it?

In terms of the work that was made around former mining spaces, coal signifies such a complex and difficult set of things that I could never begin to imagine how anybody who sees it might respond, wherever they are from. What people take from anything that alludes to coal is likely to be contingent on where they stand politically and how they feel about the path that the United Kingdom has followed since the miners’ strike.

Many thanks Andrew for your time. Please do check out his work here.