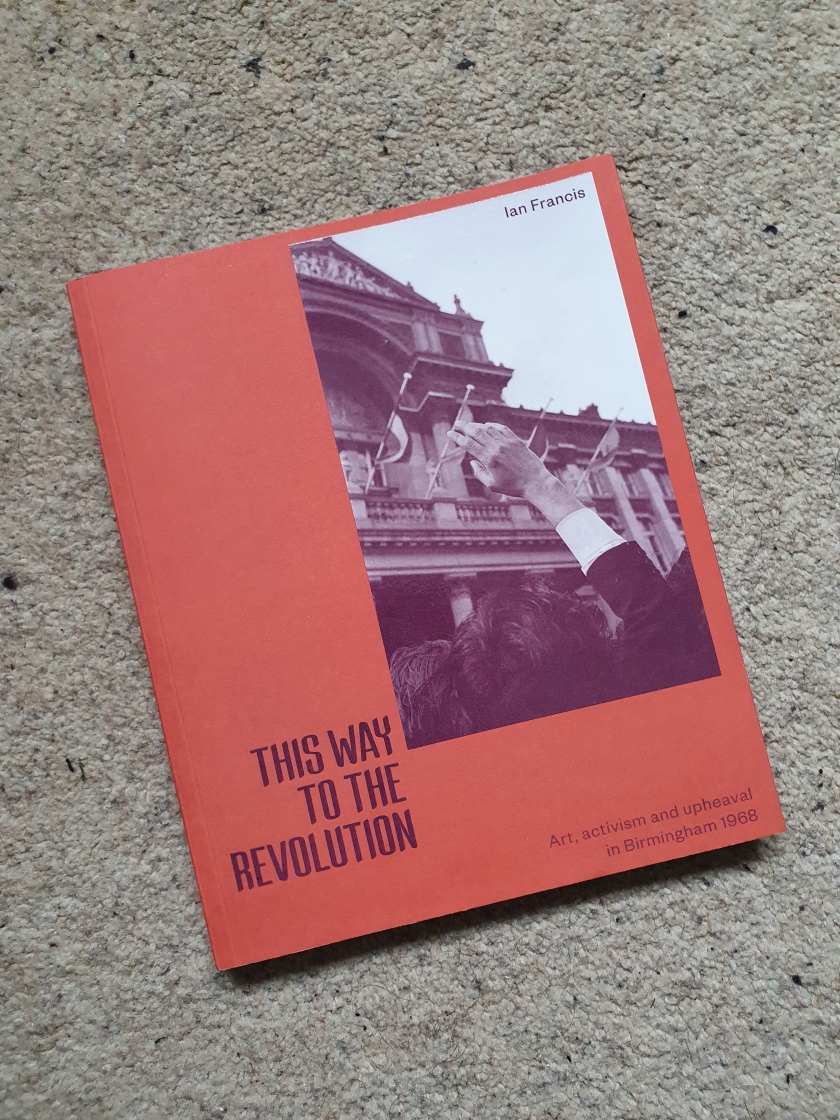 I can’t entirely recall, but I have a feeling that it was through the work of The Guardian food writer, and occasional cultural critic/travelogist Tony Naylor, that I first encountered a suggestion along the lines of when it comes to culture: “Birmingham is a city of individuals doing their own thing… and isolated little scenes”. A sweeping generalisation, which obscures a myriad of intersections and numerous points of connections, but from the perspective of an outsider looking in, very much a valid and astute assessment.

Unlike Tony Naylor’s native Manchester, or comparably sized or slightly smaller cities such as Leeds, Bristol or Newcastle, Birmingham is more than large enough to sustain suburban centres far from the core, and (perhaps even more so prior to austerity) a multiplicity of cultural spaces and institutions doing similar things. It is an easy place to get subsumed in, lots of seemingly vacant or underused space, and tracts, upon tracts of housing where potentially the privatised substance of kitchen sink drama aside, nothing seems to happen. This is because, unlike London, despite its polycentric character Birmingham’s individual neighbourhoods, even where they blend into each other, for reasons that are endlessly debatable never quite manage to reach critical mass or attain escape velocity. Something not helped by the fact that in the incredibly lopsided country that is Britain in the early 21st Century the city, like other cities and regions outside London, has a lack of major regional and national institutions.

Maybe-for those who aren’t utterly marinated in the place at least-it was ever thus? Half a century ago, way back in 1970, The International Times ran a feature on hitch-hiking around the UK. They warned travellers reaching Birmingham that:

“Essentially Birmingham is a drag. Avoid if possible, the centre being a trifle confusing to a stoned freak and the suburbs hostile and impossible to navigate.”

“Birmingham”, in The International Times (1970)

This observation forms the starting point for This Way to the Revolution: Art, Activism and Upheaval in Birmingham 1968. A book which came out at the end of 2019, representing the culmination of around two and a half years work on a National Lottery Heritage Fund Project developed and delivered by volunteers and staff at Flackpack Projects, a Digbeth based film screening and muti-arts organisation. Deeply embedded in Birmingham, the book attempts to tell the story of Birmingham’s transition into the later 20th Century, and the foundations of what it is today, through capturing a snapshot of what was happening in the city’s artistic, political and educational life during 1968.

Written by Flatpack’s Director Ian Francis, who with at least a quarter of a century’s worth of experience embed in the city’s diffuse and kaleidoscopic cultural scheme, is incredibly well suited to being an able guide and interpreter of what was bubbling away back then. In addition to volunteers and creative practitioners who made the project, Ian was aided and abetted in this by the designer Justin Hallström whose work ensures that the book is a visual as well as literary trip into the recent past, and the critic Dr. Edward Jackson who worked with the archive to write up a couple of chapters.

Birmingham’s cultural eclecticism and the diversity of the people, art forms, and all other manner of modes of expression that make it their home sit at the heart of the book, becoming the core of the narrative of creativity, adaptation and bloody minded rebelliousness that it conveys. As is expected in a book about Birmingham there are plenty of “small scenes”, such as those which coalesced around the Centre for Contemporary Cultural Studies, Midlands Arts Centre and Indian Workers’ Associations. There’s also plenty of “eccentric individuals”, some such as American visiting student photographer Janet Mendelsohn touched upon these milieus, others such as Nick Hedges, another photographer documenting inner city Birmingham, didn’t really. Other interesting figures like the singer Millie Small whose life in the late ‘60s, and 1968 song “Enoch Power” encapsulates many of the key themes the book teases out, don’t really directly intersect with any of the other stories told in the book at all, yet still serve to build up a vivid and vibrant picture of life in the city during that year.

This vivid and vibrant picture of life in Birmingham in the late ‘60s is one of the many ways in which the book does a service to the city and the West Midlands as a whole, 1968 being roughly when Birmingham reached its post-war zenith. Whilst the impact of deindustrialisation generally hit Birmingham later than was the case for more northerly regions, or even some areas of the city’s hinterland, such as the towns of the Black Country, the city’s impression run of mid-20th Century expansion driven by modern car making, aerospace and advanced engineering industries was nearing its end by 1968. This was not apparent at the time, however, one of the key long running trends which the book picks out, is the impact, for better and for worse, of the city’s driving for redevelopment centered upon cars, tower blocks, suburbanisation and a public realm that was heavily planned and specialised. This was only possible because Birmingham in the 1960s was a wealthy city, where a powerful city council run by people very used to getting their own way, was able to act of its own accord, whilst the city as a whole was attractive to the rapacious attentions of private property developers.

Prior to Covid-19 at least, the city seemed to be going through a semi-comparable building boom, however, only one of these conditions exists today. What is good about This Way to the Revolution is that it shows how the political economy of 1960s Birmingham which provided council housing, ready, relatively well paid employment for young people, and invested in institutions like the Midlands Arts Centre, Moseley School of Art and the institutions that became Birmingham Polytechnic in 1969, fed a flourishing of youth creative activity. The book shows this to the reader through the stories of people involved in the city’s flourishing alternative cultural scene, people like Steve Adajo and Frank Cook who were associated with the Midlands Arts Centre and who came up through the city’s art schools. Birmingham Arts Lab which grew out of/was a reaction to the Midlands Arts Centre, was supported by the Birmingham Settlement, and later in its existence found its home at Aston University an institution that also first began to make its way in its current form in the later 1960s. On more blue collar terrain this political economy also provided the foundations for Black Sabbath who first gained attention at The Crown in the city centre. As well as a lively biker culture which found a home at the Double Zero Club in Digbeth. The story behind the latter of which could easily form the basis for an in depth project all of its own.

Taken as a whole the book and the stories it contains make a convincing argument that historians should re-appraise their reappraisal of the year 1968. Certainly since the 1990s when the late ‘60s began to retreat so far into the past that it became worthy of serious historical study™ historians situated within the academy have been arguing that, contrary to how it is seen in popular culture and general discourse, 1968 was not a major cessura or turning point in 20th Century history. Rather, so the argument goes, the events of the year from May 1968 in Paris, through the situation in Mexico and Czechoslovakia, to major cultural moments such as the first stirrings of women’s liberation in the United States and the release of key films and albums that defined the moment, should merely be understood as being part of the broad sweep of time.

Whilst it is hard to argue against much of this perspective, and This Way to the Revolution is carefully grounded in explaining how what it recounts is rooted in the history of post-War Birmingham prior to 1968, it also makes it clear exactly why the year is so important. Essentially in Birmingham, as in so many other places, it was when a lot of things came together, or grew to fruition, which went on to have an influence for decades afterwards. Even events like the occupations at the University of Birmingham and Aston University, which were short lived, and even in their own modest terms not very successful, left an indelible mark upon those involved, and went on to shape the course of their future lives and careers. The same is true for those whose voices are little or seldom captured in the text, possibly because their voices are irrecoverable, all of the thousands of people whose lives, outlooks and trajectories were shaped by encounters with new music at The Mother’s Club in Erdington, exciting art, cinema and the possibilities of making things at the Midlands Arts Centre or Arts Lab, or who were more politicised and shaped as anti-racists by their involvement in protests against Enoch Powell and his Rivers of Blood Speech.

These people, their subjectivities, and personal connections with friends, lovers… enemies that they made during the events of 1968 are as much a legacy of the year as anything else. The institutional legacy of 1968 in Birmingham is pretty scant. Arguably St. Basils who tackle youth homelessness has a strong claim to descent from the Double Zero Club, but aside from that and a few institutions created earlier in the 1960s such as the Midlands Arts Centre and the IKON Gallery (which had stronger institutional foundations from their outset) there is little left in the institutional and material life of the city that was created in that period. This only serves however, to solidify the importance of the period’s importance for the creation of individual subjectivities and interpersonal ties. Here, through these, it is clear that 1968 in Birmingham was key to shaping the development of this often confusing, overlooked, yet always energetic and inventive city right up to the present day. Congratulations to Ian Francis and all who worked with him on capturing, sharing and celebrating this history in such a rigorous, engaging and accessible way.

You can purchase This Way to the Revolution here direct from Flatpack Projects.