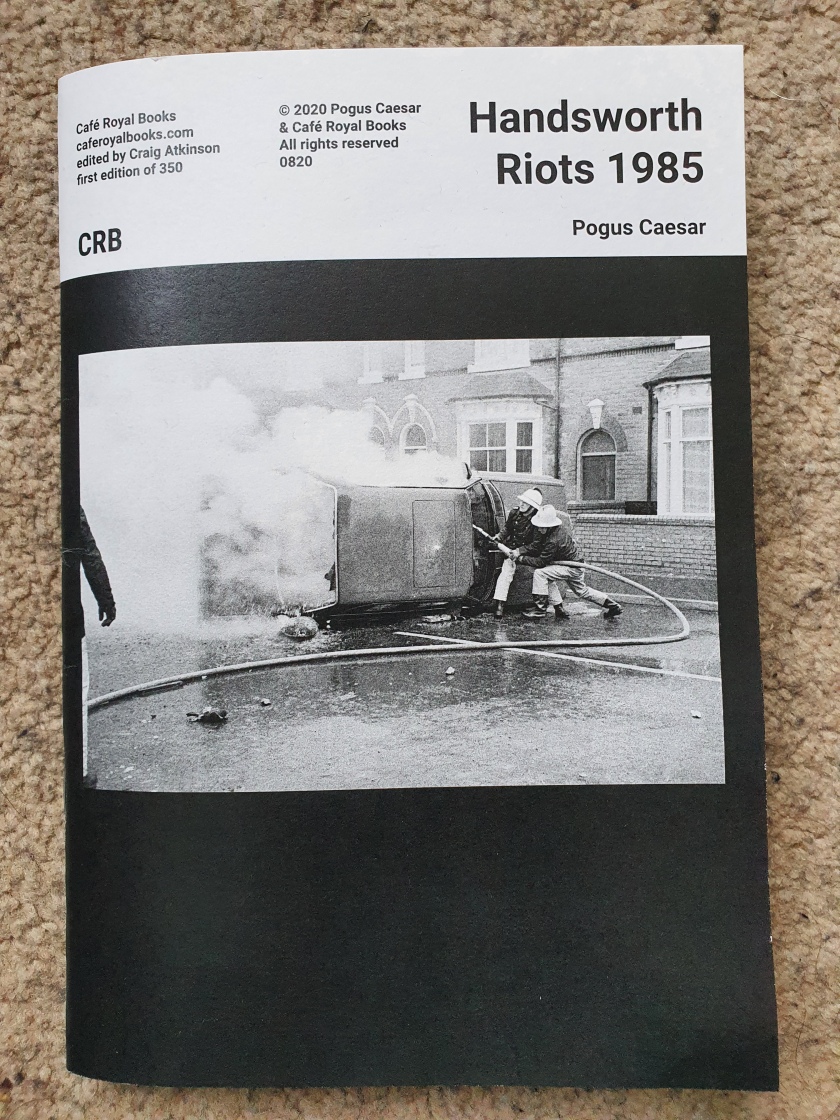 Living in Birmingham and being interested in photography I have long been aware of the brilliant body of documentary photographic work produced by Pogus Caesar over the last four decades. However, it only through Kieran Connell’s excellent Black Handsworth which came out last year, that I became truly aware of his status as the premier visual chronicler of the 1985 riots which took place in that area of north west Birmingham. As such, when I found Café Royal Books were publishing Handsworth Riots 1985 a series of Caesar’s work documenting the event, I knew that I had to get a copy.

On a primary level what the photos selected for the volume convey to the viewer a sense at once of what rioting in a mid-1980s inner Birmingham suburb looked like, and how the area looked in the riot’s immediate wake. But more critically, what they connote is a sense of the reasons for the riot themselves, as well as a fascinating glimpse of a Handsworth which is perhaps at ease with itself, but besieged and put upon by outsiders.

The images which Caesar-with Café Royal’s editor/publisher Craig Atkinson-selected for the volume, range from blurry action shots of running and commotion, through grainy photos of burnt cars, to pictures of crowds and interactions sometimes so evocative as to recall largescale, monumental, narrative painting. These pictures are knitted together by a sequence of pictures woven in amongst the set-pieces which establish the scene. These capture key locations like the boarded up Villa Cross Bingo Hall and snatches of graffiti giving a snapshot of the mood on the streets and the broader issues that the riot was about.

There is a certain unreality and an uncanniness that pervades the images taken both during and after the riots. Viewing them partway through the Covid-19 crisis it is impossible not to recall the early days of lockdown and the sense of a sudden break in the everyday order of things that was pervasive then. The photos capture a very different type of crisis and moment of rupture, but there is a similar sense of disruption and disturbance, of contradictions and tensions coming to a head. Feelings which are disonatinating the moment but which also lead to a certain clarity and new insights into the “order of things”, and what is terribly, terribly wrong with the “order of things”.

In the set-piece images riot shield bearing police form up across a junction on a terraced street. In another two officers have clearly stopped two local Black men and are in discussion with them. The policeman most in shot is wagging a leather glove near the face of one of the men he has stopped, the officer’s posture and expression an equal mixture of nonchalant contempt and unease tending towards anger. This is the state’s authority squaring up to assert itself in Handsworth. In other images the burnt out cars flipped on their sides, the graffiti and occasionally the blackened fallen timbers of an arson struck building attest to the violence and materially disruptive effects of the sudden uprising that evening in early September. Blurred images of rioters and police in motion on the other hand speak to it’s fraught yet seductive energy.

Other images, however; grant us viewers a sense of Handsworth as a place beyond the news report images connoting destruction as simmering tensions become unleashed. This becomes apparent as you study the images more closely. Many of the pictures depict everyday residents of Handsworth, unlikely to have been participants in the riots, but who are going about their lives as if neither condoning or condemning. These images vividly illustrate the diversity of the community living in the area. Amongst the most striking of these depicts a car, windows smashed and tipped on its side, an even more incongruous bathtub sat next to it. A group of predominantly South Asian people stand on the curb next to a tidy estate of newish council houses. In the background of the picture a bespectacled white man in late middle age crosses the road, smoking a pipe and dressed in a woolen cardigan as if just stepping out of his house to visit the shop. He observes the car and bathtub in the middle of the road, a plume of smoke behind him. But he’s clearly of the area and doesn’t seem especially perturbed by it.

In another image two men, an older one who is Black and a younger man who is South Asian, walk along the road together clearly deep in conversation. They’re both wearing suits and well kept if not prosperous. Again they seem to just be going about their business, despite the evidence of the riot all along them, including a burnt out car in the foreground of the picture. In other, smaller images an older Black man wearing a tie and a porkpie hat is talking whilst an older white man in a leather jacket listens intently. They’re standing on the edge of a group of much younger black people, both the older men and the younger people are at ease in each other’s company. Whilst in another an older Black woman in a smart coat and hat stands next to two Black men in the 20s wearing t-shirts. In other photos young people, white, Black and South Asian all stand together talking wearily to the police, or other official looking people.

It is not so much that the people in these pictures were pleased with the destruction the riot wrought, or even necessarily in complete sympathy with the rioters. Just that in contrast to the police and the smart all white crowd that clusters around Douglas Hurd (then the newly appointed Home Secretary) in the photos of his visit, they’re of the community affected and they have an understanding of the issues like discriminatory policing, unemployment, bad housing and neglect by distant institutionally racist public bodies that inflamed the riots. The image these pictures conveys of Handsworth is of a place which despite the discrimination, marginalisation and exploitation experienced by it’s residents have an internal solidarity and sense of themselves as a community which is impinged by the forces of capitalism, imperialism and the agents of the state who serve as the system’s enforcers.

The inherent connections between conditions and events in Handsworth and the wider struggle against capitalism, imperialism and racism are made concrete and apparent through Caesar’s documentation of graffiti in the area. This ranges from the spray painted lament “police harassment on Blacks” which speaks at once to years of frustration, and the police action that provided the immediate catalyst for the riots. Through graffiti whether painted during the riot or not, that signifies Handsworth and it’s resident’s sense of connection to struggles by groups oppressed because of their ethnicity elsewhere in the world. In one image “FREE SOUTH AFRICA” is painted on a garden wall, whilst in another the slogan “Black & Irish Unite” is sprayed on the side of a building. These slogans represent solidarity with Black and other non-white people brutalised, oppressed and excluded from political and economic power by a reactionary white’s only regime in South Africa and the almost entirely white Irish Catholic community under occupation by the British state. That these causes spoke to Handsworth residents and resonated with them clearly shows that they connected their situation and struggles in Handsworth with broader global systems of power, domination and extraction.

The overall effect upon the viewer of the rapid juxtaposition of images conveying the immediacy of the riot and disinterested state oppression, with the reality of Handsworth as a strong multicultural community, and the wider political context of global struggle against racially justified, imperialist capitalist exploitation and oppression, brings to mind the concept of montage Walter Benjamin began formulating nearly 100 years ago. This is to say that taken as a whole the volume, as well as documenting and bearing witness to events in Handsworth in early autumn 1985, also breaks down categories and presumptions in the mind of the viewer leading them to make new connections that challenge the status quo.

These are qualities which recall the 1986 documentary Handsworth Songs directed by John Akomfrah of the Black Audio Film Collective (BAFC). I first saw this in the summer of 2018 when it was screened at Grand Union in Digbeth and more recently when it was briefly made available online as part of the cultural response and dialogue the Black Lives Matter Movement opened up following the police slaying of George Floyd. Akomfrah appears in Handsworth Riots 1985 perched atop a wall reading a copy of the Birmingham Evening Mail bearing the headline “RIOT OF DEATH”. The film treads very similar ground to Caesar’s book looking at the impact of the riots-both material and in terms of individual and collective responses-upon the community, but also looking at the much wider picture, considering the experience of African Caribbean people in Britain, the West Midlands and Birmingham since the late 1940s, and asking wider questions about the roots of contemporary oppression in industrial capitalism, imperialism and the horrors of the Transatlantic Triangle. In these ways the connections between the two projects and their drive to both document, critique and promote new ways of thinking, become crystal clear. Indeed in a wry gesture to the kind of cultural struggle against both repressive state and cultural apparatuses, being waged by Akomfrah and his BAFC collaborators, as well as Caesar himself. On the back-page of Handsworth Riots 1985, a police officer stood in a line of riot shield wielding cops, turns and looks with immense suspicion back towards Caesar’s lens where a young man holding a camera at waist height can be glimpsed just inside the shot.

Of course, the ongoing movement stating that Black Lives Matter which has been building for nearly a decade, and erupted into major global protests this summer following the killing of Floyd, tells us that Caesar’s volume is not just timely with the 35 anniversary of the riot, but rather that what it conveys isn’t history. Nearly four decades on we are still grappling with the same questions about the racialised dimension to capitalist oppression and how this is mostly blunty expressed through the actions of supposedly public agencies like the police. This makes the book a potent tool for today’s activists looking to understand the recent past and the background to their contemporary struggle, as well as providing inspiration, both in the example of those who campaigned and asked these questions before them, and in terms of how the fight can be taken into the cultural arena.